It was an inspiring and historical collaboration between top notch Pianist Katelyn Bouska and the extraordinary hands of cellist Štěpán Filípek. The performance was to commemorate the anniversary of the 100th anniversary of the Czechoslovak Republic and its support for American compatriots and societies. The inspiring event was held at the Atrium Žižkov on Friday 23rd March 2018. The performance also featured the composition of Cello Sonata for Cello S. Barbera in confrontation with the intimate Fairytales for cello and piano by L. Janáček.

Katelyn Bouska met cellist Štěpán Filípek in Brno during the summer of 2015 when she visited the Czech Republic to look for areas of collaboration with Czech composers. This meeting gave birth to to sharing knowledge of the Czech and American music environments which resulted to joint concerts in Brno and Philadelphia with lots of great studio recordings.

The event witnessed representative from the U.S. Embassy in The Czech Republic, notable personality with friends and family members of the music performers. It was a wonderful experience with the great musical icons. More interviews and videos expected on this platform.

With performances described as “musically evocative” and a skill at engaging audiences in the musical dialogue, Dr. Katelyn Bouska is a frequent solo and collaborative musician. Her unique programming combining rarely-heard Czech and American music with music being written specifically for her by rising composers has found an audience throughout America and on the international concert stage in France, Canada, Austria, Italy, Germany, the Czech and lots more.

Štěpán studied at Prague Conservatory, Brno Conservatory and the Janáček Academy of Music and Performing Arts. Since 2007 he is a cellist of the Orchestra of the National Theatre in Brno. He has started his professional career as interpreter of contemporary classical music, he has performed for example with Orchestra Berg, Ensemble Recherche, or the BCO and others. He has performed solo concerti with Pilsen philharmonic and Moravian philharmonic Olomouc.

He collaborates in a long‑term with Czech Radio Brno on documentation and recordings of works of Moravian composers for cello and piano. Currently he is cellist of chamber ensembles Solaris3, Trio Opera and Tango Quartetto Re Campo. He also participates in ambitious project “Musical connections Brno‑Philadelphia” with talented American pianist Katelyn Bouska. (Credit:Miloslav Ištvan Quartett)

Make the best use of this season to get your eyes tested…..

When the drainage angle of the eye suddenly becomes completely blocked, pressure builds up rapidly, and this is called acute angle-closure glaucoma. The symptoms include severe eye pain, blurred vision, headache, rainbow haloes around lights, nausea and vomiting.Source:Kellogg Eye Center

Chiggy Chidinma writes further….Glaucoma is a silent thief of sight. The type rampant in Nigeria and Sub-Saharan Africa is Primary Open Angle Glaucoma. It gives you no sign, it gives you no symptoms. Doctors are trained by practice and experience to find out early for proper management. Damages caused by Glaucoma are irreversible. Drugs and Surgeries are only used for management of the Eye (s) involved.
God bless you Ireti Emmanuel Adesida. Thanks for joining your voice with ours. Blindness is a scourge!
#Optometrists
#Ophthalmologists
#EyeCheckLifeCheck
#DKF
#SDGs

If you listen to them then you are joining their losers club…. There is no limitation to your greatness…. just keep aspiring and conquering …… I BELIEVE IN YOU……God dey
#iretiadesidaspeaks

Strategic and planning culture is the ideology of every entrepreneur …. A well designed and monitored road map is key to the success of any entrepreneur….#iretiadesidaspeaks

The picture above is the battle between a termite (Soldier) and a ant. A termite is more classified closely to the cockroach family and ants are related to the wasp family…

Termites play a major role in nourishing the soil and have a symbiotic relationship with big trees in the forest though they’re unaccepted guests in a domestic environment….

The life of a #filmmaker
and an #agricultural #communicator

More Information about the bill

This Bill seeks to constitute a new Government body with full powers to control Community Based Organisations, Civil Societies and Ngos; by implication this bill will give this body unlimited power to exert undue influence on churches. Organisations who do not meet up with whatever future policies they constitute will not be ‘revalidated’ (revalidation is proposed to hold every 2years) This bill is a morphed version of an effort earlier in January to negate church operations . We seek to stop this Bill because it will affect the operations of churches and the freedom to worship as guaranteed in the constitution of the country.

Sign Petition here …..
The Bill is meant to handicap NGOs and make the voluntary purpose of Community development invalid …..

You can sign a petition to House of Representatives: Federal Republic of Nigeria which says:
“HOUSE OF REPRESENTATIVES STOP THE NGO REGULATORY BILL”
Will you sign this petition?

How do I start using social media for business? Organized by British Library, Business & IP Centre What a great opportunity to participate in this enlightening course ….. An up-to-date eye opener to the new hidden treasures within the #socialmedia #space

Expect my step down training in #nigeria soon via #RhealyzTEGA, #FUTAAEC, my upcoming #youtube channel and other platforms It’s all about #knowledgesharing

The importance of open data in agricultural development cannot be overemphasised. GODAN has been able to develop a sustainable data platform in addressing various challenges in data gathering and usage with the Agriculture Open Data Package.

The Agriculture Open Data Package (AgPack.info) has been designed to help governments get to impact with open data in the agriculture sector. This practical resource provides key policy areas, key data categories, examples datasets, relevant interoperability initiatives, and use cases that policymakers and other stakeholders in the agriculture sector or open data should focus on, in order to address food security challenges 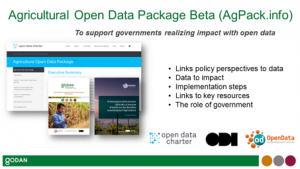 GODAN invites policymakers, agriculture specialists and members of the open data community to:

Send comments and use cases to enquiries@godan.info. Feedback on this document can also be made via the Open Data Charter Resource Centre. The GODAN Secretariat and network can provide  support to governments that are working to put the package into practice. 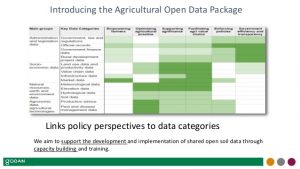 I had the great opportunity to meet my #grand #mentor He mentored my supportive father in the area of #journalism. He is over 90 years but very energetic with up-to-date grasp of the media/communication world.

He was also the founding editor of Good News #magazine in the UK.

That’s the secret of my expertise in #communication issues….. It’s an additional lesson for my mentorship platform….. What about you?

The famous actor Arnold Schwarzenegger posted a picture of him sleeping in the street under his famous bronze statue, and wrote sadly (How times changed).

The reason he wrote the sentence was not only because he was old, but because when the governor of California opened the hotel with the statue in front of him. The hotel officials told Arnold: “At any time you can come and have a room reserved in your name”.

The reality of life came in when Arnold left Government and went to the hotel, the administration refused to give him a room arguing that the hotel was fully booked. Though he could afford other hotels but he wanted leaders to learn a great lesson.

He brought a cover and slept under the statue and asked people to imagine it. He wants to convey a message that when he was in a position they were praising him, and when he lost this position they forgot and did not fulfill their promise to him. Yes, times have changed.

Why are you holding on to that position as if it’s for eternity, every stage in life is timed and one day it will elapse with another person taking over. All of this power drunkenness will soon fade away and loose it’s strength. Don’t live your life putting all your trust in people when the ovation is high because if you leave your position today, those you think will die for you will be the first to cast the stone! Only God never fails